The Dutch Safety Board’s (DSB) Preliminary Report of the destruction of Malaysia Airlines flight MH17 leaves no doubt that the aircraft was struck by multiple high-energy objects which penetrated its skin. This precipitated an in-flight breakup of the aircraft and its ultimate destruction. Flight path and ATC clearances The description of the flight path and flight level chosen and directed to be used by the relevant air traffic control authorities for flight MH 17 was uncontroversial, and confirms our earlier reports and those from aeronautical sources (and Malaysia Airlines) that the aircraft was above temporary restricted airspace.  The report also makes it clear that the flight was travelling in unrestricted airspace outside the boundary of temporary restricted airspace delineated by Ukrainian NOTAMs due to hostilities.

Role of hostilities on the ground and “black boxes” The report, in notably politically correct terminology and true to the intention of the official investigators to not ascribe legal blame, refers to what the media has called” pro-Russian separatists”, as "armed groups". It notes that the flight data recorder and cockpit voice recorder were not obtained by the investigation team but were handed by these armed groups to investigators in Ukraine on 22 July 2014. The report confirms that there was no malfunction nor evidence of manipulation of the recorders. The cockpit voice recorder was damaged by the impact, but the recording module was intact and the full 30 minutes of audio available matched the ATC transcripts examined by the DSB. No distress nor aural warnings were observed from the cockpit voice recorder, and the recording was noted to have ended abruptly. The flight data recorder also was unremarkable and disclosed no engine or other issues. Further it confirmed the last known flight path, altitude and engine cruise settings proceeded as expected without malfunction.

Pattern of debris location and holes in wreckage Analysis by satellite photo at the locations of wreckage, confirmed that the fore section of the fuselage (cockpit) landed some 2.3 km after the FDR stopped recording, and centre and tail sections came to rest thereafter along the aircraft's last known flight path. Photographs taken of the cockpit section show indentations and small holes on the outside skin of the aircraft consistent with penetration by external objects entering with high-energy.

Importantly, the Dutch safety board confirms that it has not yet examined the aircraft wreckage nor the sight of the debris locations, but only examined photographs. Examination of the cockpit floor parts which were found indicated that the penetration of objects from outside was potentially from above as holes in the cockpit floor showed a splay downwards. The aft parts of the fuselage were a subject to post-crash fire, and were found some eight also kilometres from the location of the cockpit and front fuselage sections.

In some ways, the pattern of debris and location of significant identifiable portions were located indicate the aircraft broke up in midair with the front part landing first with the remainder continuingly continuing along the trajectory downwards.

A helpful diagram (Figure 7 from the DSB report) is reproduced below, and identifies the major sections of the aircraft which have been found, and confirms the fact that large sections have not been discovered, or were completely destroyed, or consumed by the post crash fire. 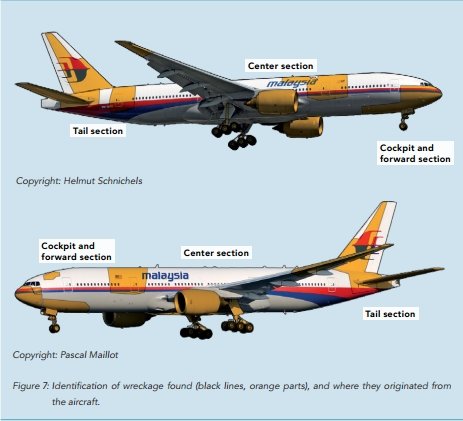 Conclusions as to probable links in the chain of causation

The predictable conclusion was that a large number of high-energy objects penetrated the aircraft causing an in-flight breakup, which is consistent with the pattern of wreckage as located over the spread of debris on the ground. There were no technical malfunctions or deficiencies know which could cause this pattern of damage. Roadmap to final report release The investigation (formal) report is expected within a year or so, and will, in part, require investigation authorities to reach the site safely where wreckage from the aircraft can be recovered and examined more closely. Specifically, the ongoing investigation will touch on the following points are set out in the report:

Background on aviation accident investigations under international law and custom

Chapter 3 of Annex 13 of the Chicago Convention (Aircraft Accident and Incident Investigation), opens as follows: The sole objective of the investigation of an accident or incident shall be the prevention of accidents and incidents.  It is not the purpose of this activity to apportion blame or liability. Preliminary Reports, as released by the DSB yesterday, are typically only factual accounts of the events of an aircraft accident or other events, with little analysis of contributing causes. The State of Occurrence, here Ukraine was originally responsible for the investigation of the incident, but by its written request to ICAO the responsibility for the investigation was delegated to the Dutch Safety Board and an international team of accredited representatives and technical advisers formed under them.  This was agreed on 23 July 2014. The other members of the international team include representatives of the State of Occurrence (Ukraine), State of Registry and Operator (Malaysia), State of Design and Manufacture (United States), State that provided information on request (Russian Federation), State of Design and Manufacture of the Engines (United Kingdom), State that provided information on request (Australia). The DSB final official investigation report is expected within about a year.

Shine Lawyers Aviation Department together with its team of international partners will continue to monitor the investigation for the purpose of assisting the families affected to get answers, and also to help its clients pursue appropriate international legal remedies for the downing of the aircraft and the death of all those onboard.