What You Didn't Know About the New Changes to CTP Insurance

Do you know how the changes to CTP insurance have impacted you?

A Shine Lawyers and ReachTEL survey has revealed that 86% of NSW residents are unaware of how their rights have changed under new CTP legislation.

Market researchers spoke to 1583 residents across NSW and discovered that while 52.3% of the people surveyed were aware of CTP changes in NSW, 83.7 were unaware of what rights or benefits have been removed as a result of these changes.

The survey revealed that 83.7% of the respondents were unaware that if they were in a motor vehicle accident, the refund they received on CTP changes this year would mean their insurance payout would limit their compensation.

Of all the people surveyed, 125 were involved in a motor vehicle accident in 2018 and 81.1% of them made a claim with their insurer. Out of those who made a claim, 7.2% said it took more than seven months to process the claim, 3.6% said their claim was denied and 100% of those drivers wouldn’t appeal the decision because of a long processing time. By contrast, none of the respondents said that they would refrain from appealing due to the legal fees involved.

With the 2017 changes to NSW insurance having made it more difficult for some victims of motor vehicle accidents to access compensation, it’s important to know what the new CTP laws involve, what your rights are and how Shine Lawyers can help. 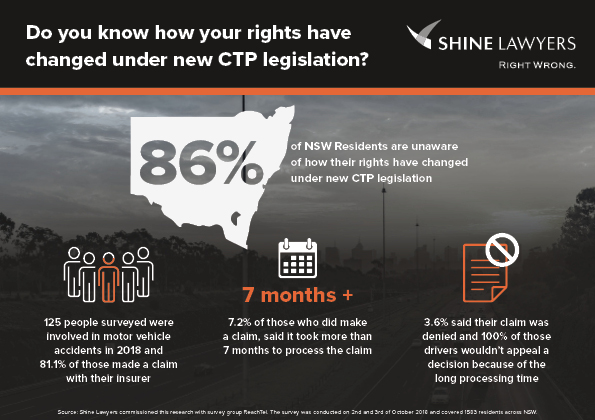 In 2017, the NSW government reformed the CTP green slip scheme in order to reduce the cost of green slips and extend six months of income replacement to all road users including – for the very first time - at-fault drivers.

The government said they would pay for the changes with measures like limiting insurer’s profits and cutting “false or exaggerated claims”. For those whose injuries were below the standard considered 10% impairment, their insurers rather than their doctors would be given the authority to direct medical treatments.

For more information about the changes and how they’ve affected drivers visit https://www.shine.com.au/blog/motor-vehicle-law/ctp-insurance-in-nsw-what-were-the-changes-and-how-have-they-affected-drivers.

Why it’s Important to Know Your Rights

Michael Mourad is a 23-year-old male who injured his left leg, left knee and lower back following a motor vehicle accident in January 2018. His insurer GIO accepted the claim for his spine but rejected the one for his knee, leaving Michael to fund his knee surgery himself. He waited three months for the surgery which he had to pay for from his own pocket, ending up with over $3000 in outstanding medical bills. Shine Lawyers have lodged an appeal on Mourad’s behalf to recover the payments.

Another client of Shine’s is 63-year-old Colin Gilbert, who suffered extensive injuries after a truck rear-ended his vehicle. His insurer NRMA deemed his injuries minor and he was faced with the possibility of having his insurance money stopped by September 2018. Shine Lawyers have appealed the decision.

Shine Lawyers have expert lawyers that specialise in car insurance and motor vehicle accident law, and work on a No Win No Fee basis. If you’ve been negatively affected by changes to the CTP or are having trouble getting assistance from your insurance company, get in touch with Shine Lawyers today: https://www.shine.com.au/service/motor-vehicle-accidents.