International Women's Day 2018: A timeline of women's rights in Australia

This International Women’s Day, the theme is #PressForProgress. Despite the support for movements like #MeToo and #TimesUp, the World Economic Forum’s 2017 Global Gender Gap Report states that worldwide gender parity is over 200 years away. Gender equality won’t happen overnight, but now more than ever, we must keep pressing for progress.

Although gender disparity still features in many facets of Australian society, we have come a long way in our mission for equality. International Women’s Day provides an opportunity for us to step back and recognise some of the important milestones and victories Australian women have secured: 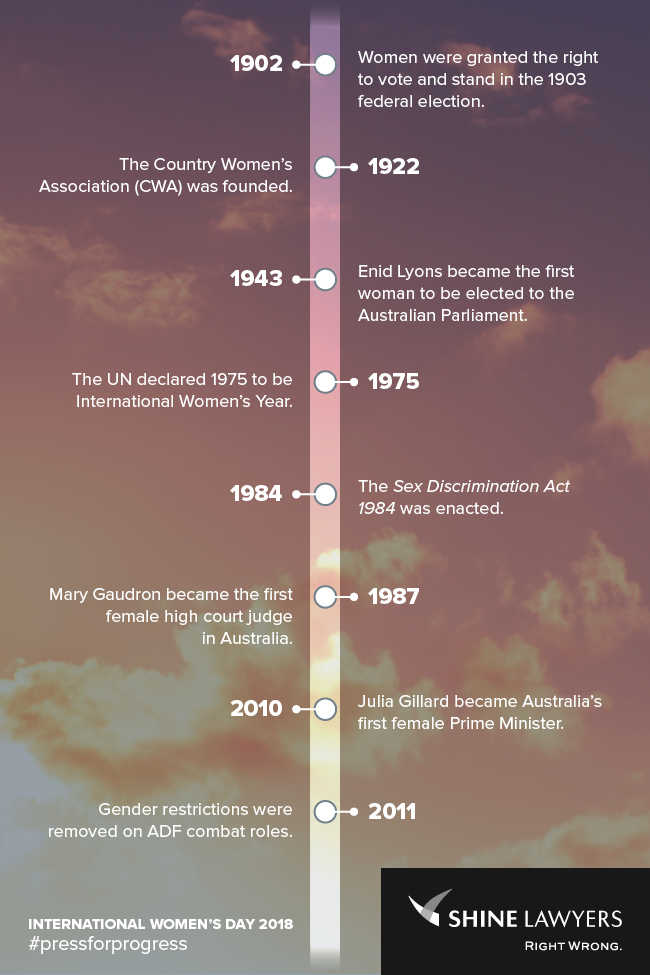 1902: Australia was first country to allow women to run for parliament, granting women the right to vote and stand in the 1903 federal election.

1922: The Country Women’s Association (CWA) was founded, empowering women to fundraise for chosen causes and support local communities. The association remains active to this day with over 25,000 members.

1943: Enid Lyons became the first woman to be elected to the Australian Parliament, standing as an important voice on issues of particular relevance to Australian women.

1984: The federal government introduced the Sex Discrimination Act, making it illegal to discriminate against someone on the basis of their sex, marital status or pregnancy.

2011: Gender restrictions were removed on ADF combat roles, with the Defence Force recognising the need to work towards fair, just and inclusive workplaces for all Australians.

Despite these laudable achievements, recent studies reveal that Australian workplaces are still fraught with injustice. Women are over-represented in part-time roles, and 35% of female workers have experienced sexual harassment and discrimination in their places of work.

The prevalence of sexual discrimination and harassment is still a prominent issue in Australian workplaces. So this International Women’s Day, whether you’re an employer, business, organisation or worker, take a stand for women's rights and Press For Progress.

At Shine Lawyers, our lawyers are experienced in all aspects of employment law, including discrimination and harassment. So if you're experiencing mistreatment in your place of work, you don't have to suffer in silence. Contact us today for tailored legal advice.