Recommendations from the Kelly Thomson inquest

Melbourne woman Kelly Thompson was stabbed to death by her former partner, Wayne Wood, in Melbourne's west in February 2014. Judge Ian Gray found that her death was preventable and that police made critical errors in the lead-up to Ms Thompson's death.

Below are the recommendations provided by Judge Ian Gray this morning regarding the death of Kelly Thompson.

Judge Gray made six recommendations, noting he would not double up on those sufficiently covered by the recent Victorian Royal Commission into Family Violence including recommending that: 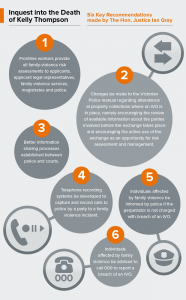 Text from graphic above.

The full findings and recommendations from this inquest are available here http://www.coronerscourt.vic.gov.au/home/coroners+written+findings/finding+-+inquest+into+the+death+of+kelly+ann+thompson