A roadside test to keep drowsy drivers off the road

Despite being one of the leading causes of road accidents in the country, driver fatigue has always been incapable of detection through roadside testing. However, this is about to change. Victorian researchers are currently working on a new roadside test to measure driver fatigue levels in an effort to keep drowsy drivers off our roads.

It cannot be disputed that over-tired drivers have a devastating impact on Australian motor vehicle accident statistics: 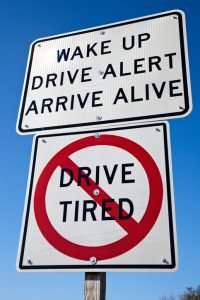 A revolutionary roadside test is currently being developed under the leadership of Austin Health Associate Professor Mark Howard to help combat these shocking figures. Mark and his research team are creating 'smart glasses'. The glasses will sense eye movement and measure the length of a driver's blinks to determine their level of fatigue. Ultimately, the test will allow police officers to test a driver's fatigue levels in the same way as roadside drug and alcohol tests.

At present, the only way to combat driver fatigue is by warning drivers of the dangers of hitting the roads when tired, and encouraging them to take regular rest stops. Once development of the test is complete, it is hoped these measures will be implemented all around Australia to ensure driver fatigue and its devastating consequences are minimised.