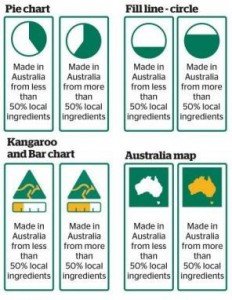 Under the newly proposed labelling laws, food packaging would be stamped according to how much of the product is locally grown with either a pie or triangle graph to represent this. The Federal Government wants your opinion on the following six potential label options.

Labels similar to this would be stamped on foods which contain Australian products and for imported goods, there would be no graphic, but text would be required to state where the food was manufactured and the origin of ingredients.

The proposed law has been initiated by the Government after the frozen berry food safety issue in February. Since then, a two-month consultation into food labelling regulations has found food can be ‘Made in Australia’ without containing any Australian ingredients.

Currently, the ‘Made in Australia’ green and gold kangaroo logo can be used on food that is ‘substantially transformed’ in Australia. This means, that some sort of processing has taken place in Australia but none of the original produce have to be home-grown.

The six proposed designs and relating surveys can be accessed at www.industry.gov.au/cool. The design which is voted most suitable by the Australian public and government is expected to be introduced by the end of the year.