Class Actions: What you need to know

Sometimes a wrongdoing can affect more than one person. A class action is a legal case filed on behalf of a group by a single legal representative. Class actions were first introduced in 1992 to provide a more efficient way of dealing with group claims and to provide people with access to justice. 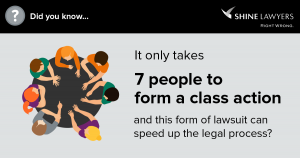 Class actions take place in the Federal Court and State Supreme Courts. For a class action to take place the case must have:

Class actions in Australia are conducted in an opt-out model. This means that all potential claimants become members of the class action whether they intended to participate or not. These members are bound by the judgment of the court or settlement unless they opt-out. You will be notified if you are involved in a class action.

Elsewhere in the world class actions have also provided settlements in a wide range of cases. The largest of these have tended to be in the financial and investment spaces.

In 2006 the collapsed US energy trading company, Enron, was subject to a US$7.4bn settlement on behalf of investors. The company disguised losses and mislead investors, leading to the biggest class action settlement in history.

Class actions are generally conducted on a ‘no win no fee’ basis. For other examples of cases we've worked on, see [our service page], https://www.shine.com.au/service/class-actions/.