Home > Blog > Asbestos and Dust Diseases > What is asbestos?

Asbestos is a term used for a range of naturally-occurring, fibrous, silicon-based minerals. These highly versatile minerals were once used across many industries, until the health effects of exposure and inhalation became apparent.

In their crystal form, asbestos minerals form long, thin fibre-like crystals visible to the eye. These are made up of millions of smaller fibres, known as fibrils, that are narrower than the smallest human hairs.

There are six types of asbestos, which can be broadly grouped into two classes; 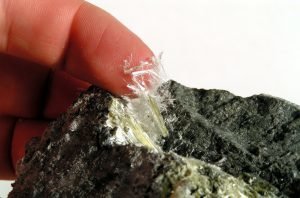 This categorisation has been important for both determining uses and understanding the dangers and health impacts – as friable material releases fibres far more readily.

While these minerals have been mined and used for thousands of years, heavy usage only started in the last 100 or so years. Its properties were highly sought after by many industries, these included;

This led to asbestos being widely used for things such as electrical wire insulation, fireproofing, wall/building insulation, drywall, plastering, flooring, piping, filtering and car parts. At one time it was even used for filters in gas masks and cigarettes!

It’s uses in the building and construction industry are the most well-known – along with the uses above it was also combined with cement to create sheets, casing and piping. And it is the people working in those industries, along with those who mined it, who are now suffering the health repercussions.

The Romans may have been the first to notice the ill effects of working with asbestos, however the first documented death was in the early 1900s.

It is now known that all types of asbestos pose serious risks to human health. According to US Department of Labor, there is no safe level of asbestos exposure and every occupational exposure to it contributes to the risk of getting an asbestos-related disease. Those working with or exposed to friable forms of asbestos are particularly at risk.

The most common of these related diseases are asbestosis and mesothelioma and they are caused by the inhalation of the small asbestos fibrils.

Mesothelioma is a cancer that develops in the mesothelium – the thin layer of tissue around organs. In asbestos cases, it affects the tissue around the lungs and is also characterised by a shortness of breath. The only known cause of mesothelioma in Australia is asbestos exposure.

Australia banned the use of asbestos in building materials in 1989, but it was still used in some forms of manufacturing. This changed at the end of 2003, when a nationwide ban on the use, import and manufacture of asbestos and asbestos-containing materials (ACMs) came into place.

Other countries around the world have also banned the use of asbestos amid safety and health concerns. However, countries like US, Canada and China do not have full bans in place.

This is currently proving tricky, in particular with Chinese imports, which some Australian companies are reliant upon. This month the asbestos safety watchdog raised concerns about potentially asbestos-riddled building materials being made overseas but used in Australia.

Have you been exposed?

If you believe you have come into contact with asbestos, no matter how recently, it is important to get in touch with an expert in asbestos law. Shine Lawyers has developed a National Asbestos Register to help identify potential affected groups and track asbestos exposure across Australia. If you have been exposed to asbestos, join the Australian Register here. Registration is free of charge, and will assist in any future litigation that may arise.

How to spot asbestos in your home and what to do

Silicosis on the rise: The hidden dangers of engineered stone